Embattled probably-still-future MLB Hall of Famer Alex Rodriguez and his girlfriend, Torrie Wilson, stopped by Princeton on Saturday, presumably on the way to meet with one of Rodriguez’s attorneys, according to the NY Post. The Yankees third baseman, whose 2013 season has been made a nightmare by nagging injuries and the Biogenesis scandal, reportedly toured several of the campus’ notable buildings and visited the baseball and football fields.

No word on the exact purpose of the visit, although it’s possible that A-Rod was hoping to get Mike Ford’s autograph.

Or maybe it was a college visit. With the MLB ready to hand him its longest ever non-lifetime suspension – which would even ban him from playing in Japan and Korea – he may be considering using his expected increase in free time to go back and finally get that college degree. Although Rodriguez has missed the deadline to apply for the Class of 2017, he could certainly help his chances of getting into the Class of 2018 by donating a new stadium or three or by pulling some strings with influential Princeton grad Eliot Spitzer ’81, with whom he purportedly shares at least one mutual friend.

Although I’m sure he enjoyed visiting the place where they filmed A Beautiful Mind, and he would be all but assured a starting spot on the baseball team (or really any Princeton team), it isn’t likely that A-Rod will want to attend an institution with an honor code – he may, however, like the way they do things over at Harvard.

After two home wins at Class of 1952 Stadium, the men’s lacrosse team faced perhaps its toughest opponent so far Saturday night in front of a crowded Princeton Stadium. The No. 7 Tigers (6-3 overall, 2-1 Ivy League) fought hard against No. 8 Syracuse, but after a wild game that was tied at six different points, the Orange (7-2, 2-1 Big East) came out on top, winning 13-12. END_OF_DOCUMENT_TOKEN_TO_BE_REPLACED

The No. 12 women’s water polo team will begin a three-game home stand at DeNunzio Pool this weekend against conference opponents. The Tigers (17-5 overall, 2-0 CWPA Southern) open against Mercyhurst, whom they defeated last year at home and at the Harvard Invitational by scores of 10-2 and 9-5. Hoping to end their regular season on a high note, they take on Harvard later that evening and Bucknell on Sunday. END_OF_DOCUMENT_TOKEN_TO_BE_REPLACED

On Saturday the women’s lacrosse team (6-3 overall, 3-0 Ivy League) will head to Reese Stadium to take on Ivy League rival Yale (6-4, 0-3) for Yale’s Alumni Day. Princeton is currently riding a three-game win streak, highlighted by big wins over then-No. 12 Johns Hopkins and then-No. 11 Cornell, which has earned the Tigers a No. 14 ranking in the Inside Lacrosse polls. However, the Cornell victory was Princeton’s first road win of the season — they are 1-3 on the road. Couple these road troubles with Yale’s impressive 2-1 home record — their only loss coming to a talented Dartmouth team (7-3, 3-0) — and the stage is set for an intriguing matchup. END_OF_DOCUMENT_TOKEN_TO_BE_REPLACED

After a strong start followed by a shutout loss at Seton Hall on Wednesday, the baseball team will try to get back in the win column and keep pace with Gehrig Division rivals Penn and Cornell this weekend as it leaves the Orange Bubble for doubleheaders against Dartmouth and Harvard. END_OF_DOCUMENT_TOKEN_TO_BE_REPLACED

END_OF_DOCUMENT_TOKEN_TO_BE_REPLACED

The men’s lacrosse Ivy League standings are quite volatile at this point in the season. With multiple ties in the standings, conference games coming up this weekend are critical in determining the final standings. Below, we fill you in on the race so far:

END_OF_DOCUMENT_TOKEN_TO_BE_REPLACED 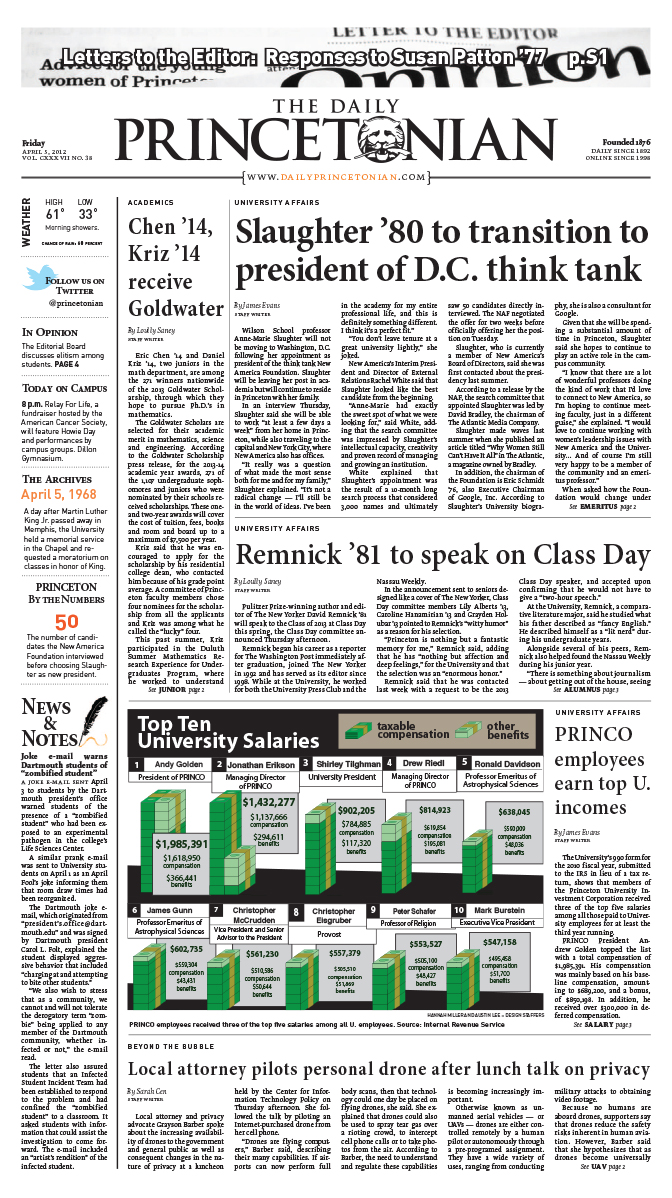